WHAT IS HAPPENING IN GAZA, PALESTINE?

Violence erupted on Friday when Israeli police deployed heavily as Muslims were performing evening prayers at Al-Aqsa during the holy month of Ramadan. The Palestinian Red Crescent Society said more than 300 Palestinians were injured by Israeli police, who fired rubber bullets, stun grenades and tear gas.

On the same day, thousands of flag-waving Israeli nationalists were due to march through Muslim neighbourhoods in the Old City in a provocative parade that celebrated Israel’s capture of the city in 1967.

In addition, Israel has unleashed new airstrikes in Gaza after tensions boiled over when Palestinians were forcefully removed from their homes in Sheikh Jarrah. An Israeli court ruled that Jewish settlers were allowed to take Palestinians homes by force leaving dozens of families homeless. health officials say at least 20 people, including nine children, were killed by Israeli air strikes.

Israel’s twelve-year closure of Gaza limits access to educational, economic and other opportunities, medical care, clean water and electricity for the nearly 2 million Palestinians who live there. Eighty percent of Gaza’s population depend on international humanitarian aid.

The Israeli government continued to enforce severe and discriminatory restrictions on Palestinians’ human rights; restrict the movement of people and goods into and out of the Gaza Strip; and facilitate the transfer of Israeli citizens to settlements in the occupied West Bank, an illegal practice under international humanitarian law.

WHAT CAN I DO TO HELP?

AusRelief are currently working with organisations in Gaza to help provide urgent medicine and medical supplies, trauma surgery and emergency medical treatment as well as providing struggling families with food packs and hot meals. In addition, we are raising funds for a fully equipped ambulance to be given to the Palestinian Red Crescent Society to help alleviate some of the pressure Palestinians are currently facing. 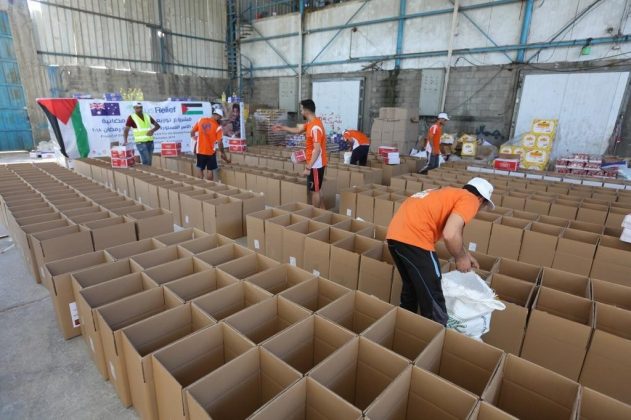 Our field operations team in the Gaza Strip was on Sunday delivering...

The United Nations Relief and Works Agency for Palestine Refugees...

We are distributing Feed the Needy packs in the Gaza Strip.Pay your...

In Gaza, our flag is being flown in support of the oppressed...